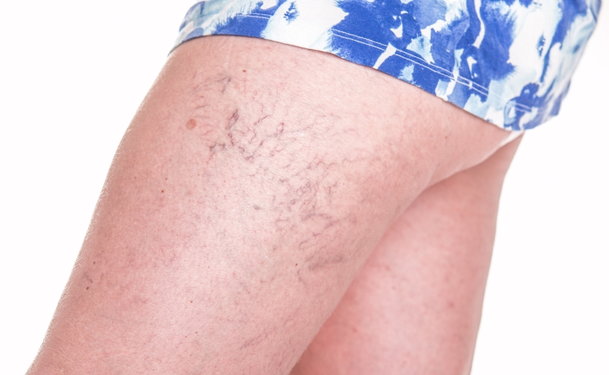 Traditionally, liquids were used for sclerotherapy. Foam sclerotherapy mixes a chemical and a gas (sometimes air), yielding a thicker, foamy consistency. In the United States, the chemical used might be polidocanol (Varithena), sodium tetradecyl sulfate, sodium morrhuate, or glycerin. The resulting agent is kind of like shaving cream or foamy hand soap.

Foam sclerotherapy is performed in your doctor's office. First, your doctor administers a local anesthetic to numb the treatment area. Once the area is anesthetized, the sclerosing foam is injected, using duplex ultrasound to ensure it goes exactly where it's supposed to.

Depending upon how extensive an area is being treated, you may need more than one injection. The whole thing usually takes less than an hour, and in many cases as little as 15 minutes.

Most people can return to their normal routine immediately after foam sclerotherapy. To aid the healing process, your doctor may have you wear a compression stocking or bandage for anywhere from a few days to a month.

More than half of patients achieve satisfactory results with one treatment of foam sclerotherapy, noticing a visible improvement shortly after the procedure. In some cases, it can take longer to see results, though, and in some cases you'll need follow-up treatments.

Is foam sclerotherapy right for you?

For the long vein on the leg (the saphenous vein), the Society for Vascular Surgery and the American Venous Forum recommend a different type of procedure (called endovenous thermal ablation) instead of foam sclerotherapy.

You should not undergo foam sclerotherapy if you:

Does foam sclerotherapy hurt? Are there side effects?

Common problems can include hyperpigmentation, which is a darkening of the skin color. This side effect happens as much as 30 percent of the time. Hyperpigmentation goes away in most of those cases—70-90 percent—within a year.

The actual procedure can be painful, and it's not uncommon to experience itching, redness, pain and bruising around the treatment site, though that should go away within a few days.

Less common problems: On rare occasions people may experience a visual disturbance, headache, or confusion. Foam sclerotherapy has been associated with a higher risk of microembolisms, tiny clots or obstructions which may form around the treated area. These may form in the heart for people that have a condition called patent foramen ovale, which is a hole in the heart.

There have been a few extremely rare cases (less than 1 in 10,000) where people have experienced heart attack, pulmonary embolism, stroke, and even fatalities after treatment with foam sclerotherapy. These extremely rare risks can be greatly reduced by following your doctor's instructions regarding elevating your leg and staying mobile. The use of pre-mixed foams, rather than those mixed in your doctor's office, might also lower the risk of these severe reactions.

If foam sclerotherapy is necessary to treat a medical problem (more common with larger varicose veins), the procedure may be covered by insurance, though insurance companies tend to have very specific treatment coverage criteria. If the foam sclerotherapy is for a cosmetic procedure or the specifics of the medical situation don't meet your insurer's requirements, it won't be covered. Check with your insurer to find out more about your coverage.

The average cost for sclerotherapy can range from $300 per treatment session up to $1,000 or more, and can vary based on the extent of the treatment area. Foam sclerotherapy typically costs less than surgery.